Are avocados native to Hawaii?

No, avocados are likely an early plant introduction by a Spaniard Don Francisco de Paulo Marin who died in 1837 as well as additional introductions from sailors and travelers who arrived to Hawaii's shores in the early nineteenth century. Some of the first avocado trees were established in Marin's garden in Pauoa Valley on Oahu, located just mauka of PunchBowl Crater between Makiki and Pacific Heights. In 1825, the naturalist on the H.M.S. Blonde reported avocado as being identified in Hawai. Original seedling trees are believed to be of Guatemalan origin and had become quite common on Oahu and were being transported to the other islands by the 1850s.

For over 200 years immigrants have been visiting, and staying on the Hawaiian Islands; explorers, traders, colonists, missionaries, whalers, and a host of plantation workers from all around the world. Our tasty avocado fruits came by way of sailing ships that traveled to Hawai’i from Mexico, Central and South America, Spain, Portugal, Brazil, and Puerto Rico. Seeds of the varying avocado fruits were eaten and simply planted, they have been shared, grafted and grown in many home gardens and farms.

Local farmers picked up on the value of the avocado fruit and trees, and many of Hawai’i’s first avocado varieties were in fact cultivated by Japanese coffee farmers on Hawai’i’s Big Island. Naming these buttery fruits like they were family, a handful of Hawai’i’s avocado varieties have the famous surnames to prove it; Ohata, Yamagata, and Nishikawa.

When do Avocados fruit in the Hawaiian Islands?

In Hawaii, due to its many microclimates and wide diversity of avocado varieties, often has fruit of one variety or another all year round.  The Sharwil variety is popular with Hawaii commercial growers, and has a long and heavy bearing season throughout the winter months of November to February.

Avocados are now found in food markets all over the United States at all times of the year. The major Florida crop comes on the market from June to February and the California crop from January to June. The US market now relies heavily on imported avocados from Mexico.

What types of avocados are grown in Hawaii?

Hawai’i has over 200 avocado varieties, we have all three of the main classifications of avocado including Mexican (aoacatl), Guatemalan (quilaoacatl), and West Indian (tlacacolaocatl) domesticated landraces. The avocado, possibly originated in the Tehuacan Valley in the state of Puebla, Mexico, although fossil evidence suggests similar species were much more widespread millions of years ago.

Sharwil is the only variety currently exported to the US mainland. 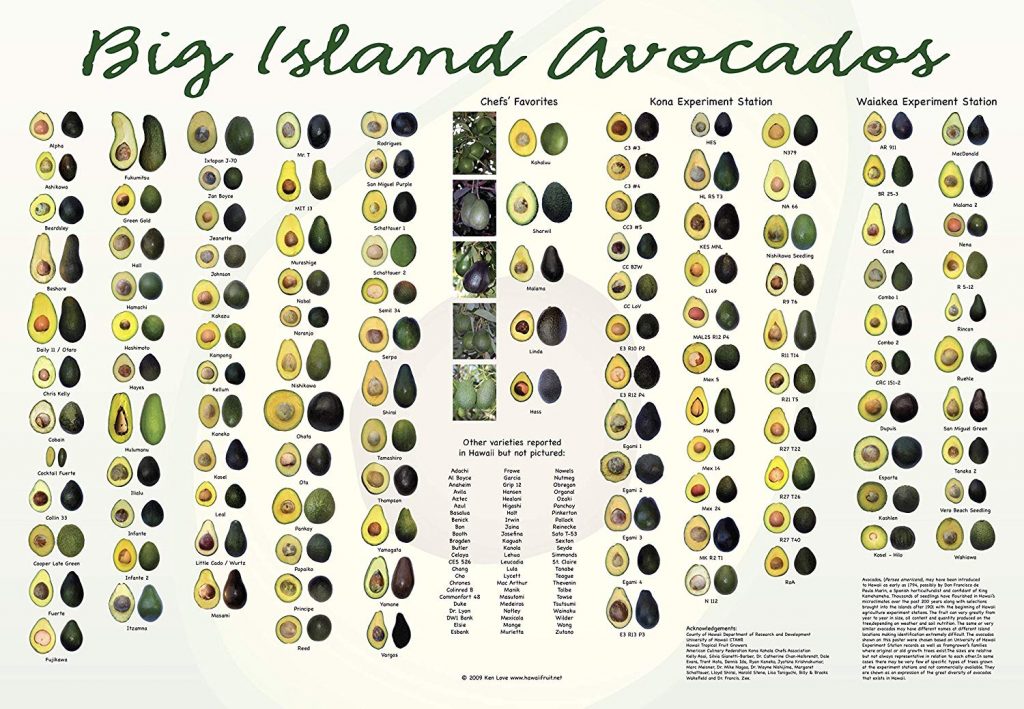 Where do Avocados Grow in Hawaii?

Avocados are grown on every island in Hawaii. Commercial orchards can be found on Maui, Oahu, and the Big Island. The Kona area of the Big Island has historically been the premier commercial area for avocado growing throughout Hawai’i.